All Aboard at Sand Creek Station!

The course plays on the town’s railroad history, and many holes are, as they say in Scotland, “hard by the cinders,” continuing a century’s old tradition of golf bordering railways. We have also recreated the famous Road Hole green on our 16th Hole, which once sat adjacent to a railway. Another replicates the famous “Redan” from North Berwick, Scotland. Other holes have characteristics of early American holes, which also fronted railways at one time. The 12th hole for example, is similar to the fourth at the National Golf Links of America, one of our early classics. The ninth features a small platform green; typical of early American courses while the green on the par 5 fourth has some wild contours, seldom built these days.

The course will have an unlimited water source, so it can always be one of the best-maintained and greenest courses in Kansas. It has back tee yardage of more than 7200 yards, which, combined with the ever-present breeze and holes routed in a variety of direction, will make it one of the top challenges in the state. With five sets of tees, it will be negotiable by all golfers.

The course also makes use of the site’s best natural features, with holes 1, 2, 8 and 9 bordering Sand Creek itself. Great care was taken to utilize every existing tree to enhance golf holes strategy and character. Several ponds have been built to enhance aesthetics and a few influence play.

Jeffrey D. Brauer has been a golf course architect since 1977. He moved to Arlington, Texas and formed GolfScapes in 1984 and over the past 25-plus years has been involved in a variety of projects ranging from partial renovation to international resorts.Brauer began his career in the Chicago area – his first project was the Kemper Lakes Golf Course, site of the 1989 U.S. PGA Championship. He has been a member of the American Society of Golf Course Architects since 1981, serving as president of that organization during its milestone 50th Anniversary year in 1995-1996.Brauer still studies the classic works, both old and new, and has played more than 75 of the best courses in the world. Because he is always on the cutting edge, Brauer is a popular guest columnist for many publications and websites, and his work has been spotlighted in most of the world’s major golf magazines. Golf World ranked him as one of the top 20 golf course architects in the country.Brauer has developed a portfolio that keeps him at the forefront of desired designers, for both new course and reconstruction and renovation projects.Course Designer, Jeff Brauer was just recognized for the work he did on two other golf courses - The Quarry at Giants Ridge in Biwabik, Minn., was recently named Best New Upscale Public Course for 2004 by Golf Digest and The Wilderness at Fortune Bay in Fortune Bay, Minn., was named among GOLF Magazine’s Top 10 Best New Places To Play and Travel & Leisure Golf’s 10 Best New Public/Resort Courses in America for 2004. Kansas’s golfers are also familiar with the Brauer-designed Colbert Hills Golf Course at Kansas State University, rated the state’s No. 1 public course.(Bio Information from jeffreydbrauer.com) 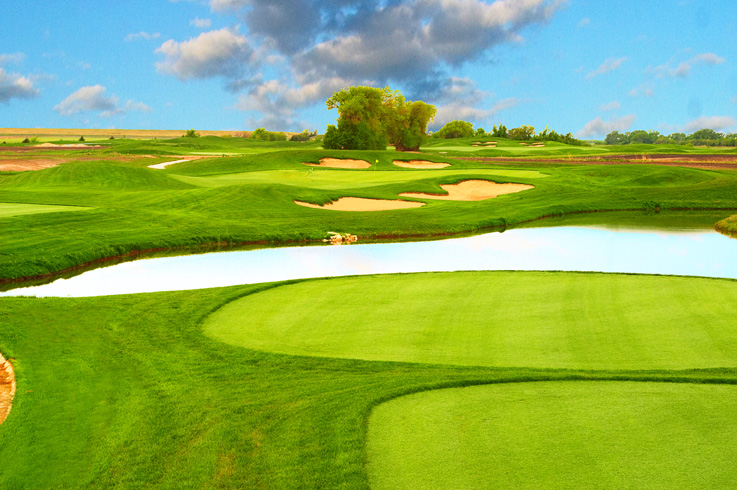 Or watch our flyover promotional video 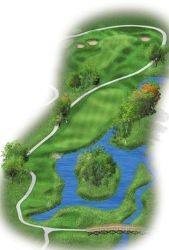 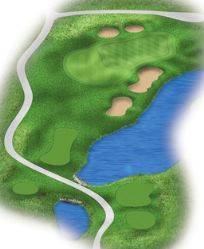 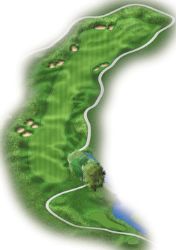 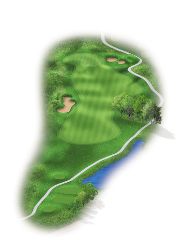 Hole #5 (345, 318, 300, 271, par 4): “Railroad” This hole will be demanding especially with a south headwind. The railroad tracks run along the right side of the fairway encompassing the history of Newton, Kansas. 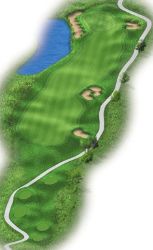 Hole #6 (467, 442, 379, 343, par 4): “Elevation” Maybe the most demanding par four on the course! The elevated tee boxes provide you with a snapshot image of this long par four. Fairway bunkers run along the right side of the fairway. Beware of the watery grave to the left of the green. 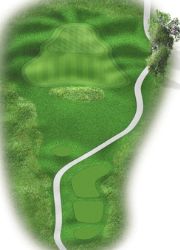 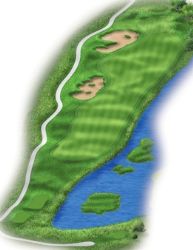 Hole #8 (470, 443, 407, 357, par 4): “Serenity” A demanding, but breathtaking par four that runs alongside Sand Creek demands a long and accurate tee shot. You should favor the right side of the fairway for the best approach to the green. Beware of the “run-off” to the left of the green. 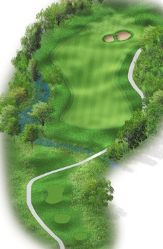 Hole #10 (648, 612, 555, 525, par 5): “The Beast” This par five measures 648 yards from the back tees and is the longest hole in the state of Kansas! Aim for the right side of the fairway to make sure you avoid the water hazard to the left. Then aim to the left to miss the lake on the right. An accurate third shot is a must with a green that is protected by a large greenside bunker on the left and water to the right! If you par this hole, keep the card. If you birde the hole, we give you a "I conquered the beast" t-shirt. 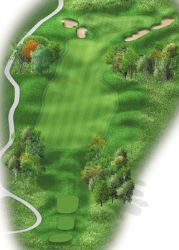 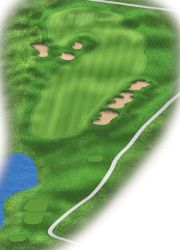 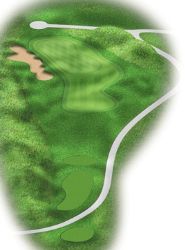 Hole #13 (230, 183, 157, 129, par 3): “Hidden trouble” This is the longest par three on the course. Most players will be using a long iron or fairway wood. The long and treacherous bunker that runs alongside the left of the green can be only partially seen from the tee box.

Hole #14 (484, 438, 395, 324, par 4): “Northward” Fourteen is the longest par four on the course measuring over 475 yards from the back tees. The hole will play downwind in the summer. Take dead aim as fairway bunkers protect both sides of the fairway. Coming up short on your approach isn't a bad play to avoid the four bunkers that are positioned behind the green. 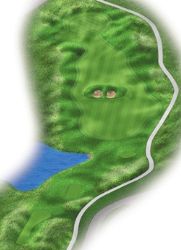 Hole #15 (382, 342, 289, 223, par 4): “Buried Elephants” Are we in Kansas? Fifteen is a short par four with large mammoth mounds on both sides of the fairway. There are two large fairway bunkers that can be reached from the tee. It is wise to lay-up short of the bunkers to leave a short to middle iron to the green. 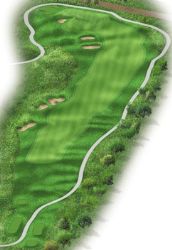 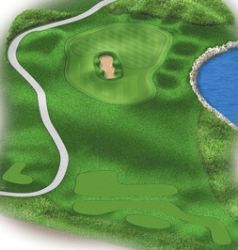 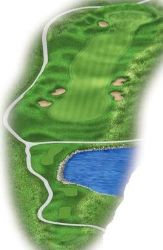 Green to a Tee

Green to a Tee is an initiative started by KemperSports in 2009. It was created to aid their golf courses in becoming leaders in environmentally-safe practices in the golf industry. The overall goal of the program is for each course to be managed in the most environmentally-sound manner as possible. This includes the following areas: golf course maintenance, habitat management, water conservation, energy usage and recycling. There are four levels that courses can reach by implementing practices and standards set forth by KemperSports.

Some of the changes that have taken place at our course are as follows:

Attention Customers:  We will be aerating our greens beginning on Tuesday, Sept. 3rd.  Check out our PLINKO Challenge on our Facebook Page @sandcreekstation to see what great deals we have as the greens heal up!